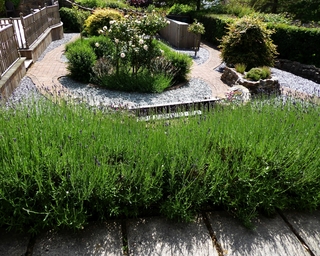 Photo taken from the path leading to greenhouse and utility area, facing south and looking up along the valley.

The garden is on an west facing slope with underlying carboniferous limestone. When the house was built part of the site had to be dug into the bedrock to create a flat area exposing a steep natural rock face, the part natural rock and stone wall is 12 feet tall with a path on top! Crinoids can be seen on the rock surface.

Over the years the garden has been fully terraced with access steps to the different levels. The photo shows the main rear garden area which used to be a highly productive fruit and vegetable growing plot and even had room for chickens. Ill health and age necessitated a redesign of the garden with low maintenance the key and the current structure was largely completed before Max arrived. The paths and numerous plant beds around the house provide interest and different growing conditions. There are a number of productive espaliered apple and pear trees and our greenhouse is used once again for growing tomatoes, cucumbers and peppers

A long patio allows Max room to play fetch with tennis balls. While Max likes to follow the paths to the areas where he has access the greenhouse is no go, as is the high path (lots of summer bulbs and steep drops) and those terraces where toxic plants are grown eg Daphne and Hellebores.

In the main rear garden there is a major rock bed and several other plant beds (both at ground level and raised) with paths winding in a semi formal pattern among blue and grey slate ground cover. There are two lovely specimen acers and surrounding the garden are mature hedges, together with walls and fences.

There are lots of nooks and crannies where Max can explore, though the hedge has netting to lower section to stop him wandering and some areas are out of bounds.