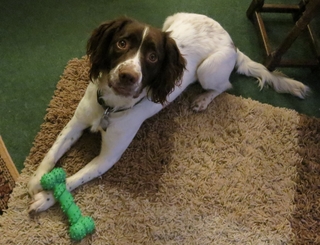 Max is a lovable Welsh springer spaniel who joined us in 2016 when he was one year old. At that stage he was still like a puppy and had a habit of taking leaves and flowers from garden plants. Not much has changed!

Researching toxicity of plants showed that we had some real problem plants in the garden such as yew, rhododendron and azalea. So we set about removing some plants and replacing with others that are safer. We also were far more careful about using garden chemicals.

Are we taking the risks far too seriously? We don't think so. Knowing that Max does take leaves and petals makes plant poisoning more likely. Removing the most toxic plants, those that can cause serious harm or even death, seems the common sense approach.

Gardeners World state on their toxic plant list: "With help from Dogs Trust, we've created a list of the most toxic plants to dogs. All of these are plants can be lethal to dogs and dog owners would be well advised to avoid growing them.