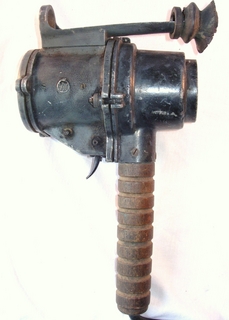 Patent numbers, when found on an object, are a very useful way of researching and identifying objects and their earliest possible production dates. Whereas the 1839-1991 Diamond Mark and Registered Numbers were concerned with ornamental or decorative designs, patents were concerned with how things worked. A product could have several different patents applying and a patent could be applied across several products. There are extensive patent records available, many digitised.

In the photo example we have an old signalling lamp with a UK patent number of 535575/1941 on the rim. We were initially unsure whether the last number was a 5 or 6 so we cross checked the logo to confirm the maker of the lamp (British Thomson-Houston) and then searched Espacenet using that name, 1941 and the term "lamp"

Among a list of patents, we found this direct hit GB535575 (A)  -  Improvements in and relating to lamps for signalling and similar purposes which has a visual confirmation of a drawing of our lamp with the signalling mechanism and meant we were able to confirm without doubt that we had the right attribution.