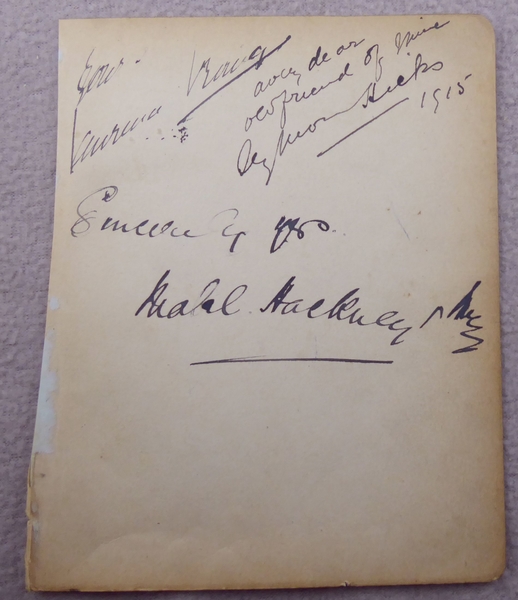 Sometimes you start to investigate a piece of ephemera and it suddenly becomes emotional.

That was the case when we started researching this page from an autograph album and realised the tragedy behind the signatures, and the later sad signature of a friend, Seymour Hicks.

Here is the listing for the autographs:

Wiki excerpts: "Laurence Sydney Brodribb Irving (21 December 1871 - 29 May 1914)[1] was a well known English dramatist and novelist. He died along with his wife in the RMS Empress of Ireland disaster. Irving was married to a fellow performer, actress Mabel Lucy Hackney (1880-1914)

Laurence and Mabel were on a tour of first Australia and then North America from 1912 to 1914. Their biggest success on the tour was Laurence's own play Typhoon which was a topical play set in the time of the Russo-Japanese War, with Laurence playing a Japanese officer.

Reports in the news accounts of the tragedy say that they got separated and Laurence was in a position of temporary safety, but he knew Mabel could not swim and he jumped back into the St. Lawrence River to rescue her. Their bodies were never found"

Next to the signature of Laurence Irving is the 1915 signature of Seymour Hicks, with the poignant tribute to "a very dear old friend of mine" Wiki: "Sir Edward Seymour Hicks (30 January 1871 - 6 April 1949), better known as Seymour Hicks, was a British actor, music hall performer, playwright, screenwriter, actor-manager and producer. He became known, early in his career, for writing, starring in and producing Edwardian musical comedy, often together with his famous wife, Ellaline Terriss. His most famous acting role was that of Ebenezer Scrooge in Charles Dickens's A Christmas Carol"

To the reverse is the autograph of Tucker, the Singing Violinist

The Empress of Ireland sank in May 1914 after being struck by the Norwegian collier Storstad. She sank quickly, and of the 1477 passengers and crew onboard, 1012 were lost, including 134 of the 138 children. The losses were greater than those of the Titanic.