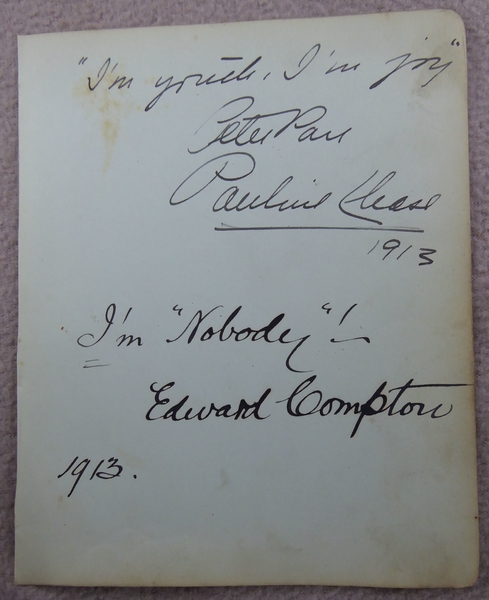 One of our favourite recent purchases was an old autograph book with theatre and stage signatures from the WWI era.

This is the autograph of Pauline Chase, who played the lead role of Peter Pan and adds "I'm youth, I'm joy"

J M Barrie wrote, re Peter, "Either he must be the whimsical fairy creature that Nina Boucicault made him, or he must be the lovable tomboy of Pauline Chase. there is no other way"

Presumably Edward Compton is Edward Compton Mackenzie, actor-manager, whose daughter Fay Compton starred in several of J M Barrie's plays. The "I'm Nobody" reference is intriguing, might he have played or understudied for Captain Hook? (if the Nobody calls Peter Pan a Coward line was in that production!)

And that isn't the only link with Peter Pan as we also have the autograph of Dorothea Baird (Irving), who played Mrs Darling in the 1904 production of Peter Pan