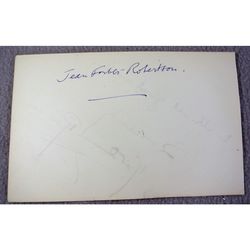 Wiki states: "Forbes-Robertson was born in London, the second daughter of the actors Johnston Forbes-Robertson and Gertrude Elliott. She spent her early years with her parents, sisters and aunt Maxine at her aunt's Bushey Heath, Hertfordshire home, Hartsbourne Manor, where a wing was used exclusively by the Forbes-Robertsons.

Forbes-Robertson began her professional stage career in South Africa in 1921 in a production of Paddy, the Next Best Thing produced by her mother. She toured in Australasia in her mother's company until 1925, when she appeared in London in Dancing Mothers opposite her mother at the Queen's Theatre. She gained wider notice in 1927 as Helen Pettigrew in Berkeley Square and Juliet in Romeo and Juliet, impressing the critics with her emotional range. That year, she first played the title character in Peter Pan, a role that she would repeat annually during the Christmas season until 1935 and in 1938-39 in London, and also on tour, gaining wide renown for her portrayal.

Peak career
In 1928, she appeared at the Old Vic Theatre in a season of plays directed by Andrew Leigh that included Hamlet, The School for Scandal, King Lear as Cordelia, The Merchant of Venice, and Everyman. She played the title role in Hedda Gabler in 1931. In 1932, she played the dual role of Viola/Cesario in Twelfth Night at the New Theatre, directed by Robert Atkins, and appeared in Strange Orchestra by Rodney Ackland, directed by John Gielgud at St. Martin's Theatre. Forbes-Robertson was sometimes seen as an intellectual rather than a highly dramatic actress: in The Manchester Guardian Ivor Brown called her Hedda Gabler "a beautiful miniature". On the other hand, St John Ervine in The Observer wrote that he had "never witnessed anything so beautiful as Miss Forbes-Robertson's performance" as the heroine of Romeo and Juliet; and in Twelfth Night, Brown said of her performance as Viola/Cesario, "her complete absorption in romance is so simple, so 'unactressy' as to open up the play anew."